YG released the 5th member of their upcoming girl group with a dance video and in just 2 days, the video recorded over 1 million viewers.

On May 11st, YG uploaded a video on YouTube and posted it on YG-Life blog entitled “Who’s That Girl???“. 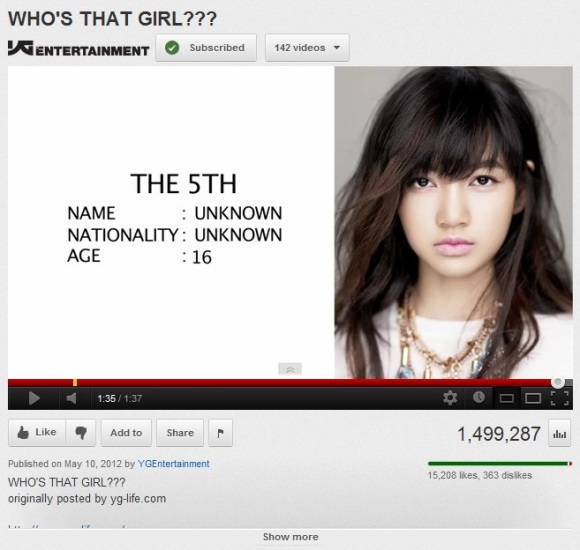 The name and nationality has not yet been revealed. Also, comments are flooding and incessant growth.

In particular, the ‘5th member’ is known with mixed nationality with half Caucasian and half Korean. In addition, the confirmed members are also seen dancing on the video.

At the present, only 5 members are revealed. The first 2 are from Mnet‘s ‘Superstar K‘. Kim Eunbi from ‘Superstar K2‘ and Euna Kim from ‘Superstar K3‘. The other member is known as Shin Min Ah look a like named Jenny Kim. And lastly the member with the majestic appearance looked like 2NE1‘s Dara.

Meanwhile, YG’s new girl group is expected to debut on the month of September.