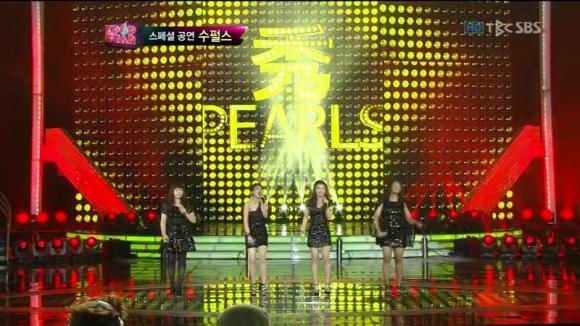 The K-Pop rumor mill has been in full swing lately regarding YG Entertainment’s new girl groups. The latest rumor says YG is working on two girl groups, Su Pearls and YG’s own version of Girls’ Generation, under the goal of debuting them in September.

According to industry experts, YGE was indeed going to debut their own version of the Girls’ Generation. That’s why they revealed photos of five new trainees, including Kim Eunbi, Yuna Kim, and Jenny Kim, through their official blog earlier this year.

However, their plan hit a roadblock after YGE decided to bring in Su Pearls from SBS “K-Pop Star,” comprised of Lee Ha Yi, Michelle Lee, Lee Jung Mi, and Lee Seung Joo. Although the original member Park Ji Min signed with JYP Entertainment, YGE found a replacement in Lee Ha Yi, and Su Pearls were reported to be training under the goal of debuting in September as well. But most agencies don’t debut two new groups in the same month, so questions kept arising about the schedule of the two girl groups.

To get a clear answer on this, local media Sports Chosun caught up with Yang Hyun Suk recently, and asked when exactly the two groups are planning to debut.

“Nothing has been decided yet. We’re working extremely hard to make sure the group has a unique personality that stands out from the rest of the groups. But we’re not even sure if it’s going to be an eight member group or nine member group. We’ll probably get a better idea of the members one month before the release of their album,” Yang Hyun Suk was quoted as saying.

“For me, who’s managed Big Mama in the past, Su Pearls is a very special project. That’s why I’m directly involved with the group’s entire debut process. In fact, the YG version Girls’ Generation is all comprised of trainees, but Su Pearls has more big stage experience,” he added. “Both teams are working extremely hard now. The team that works harder will get to meet the fans first.”

We still have two months left till September, but the announcement can come out any time now. We’re expecting to find out in the next few weeks, after 2NE1 releases their album, but with YGE, you just never know what to expect. We’ll keep you posted on any breaking news, so keep checking back!