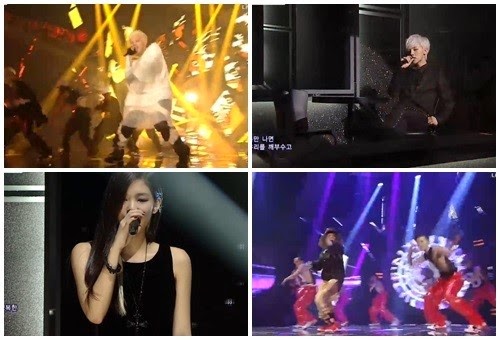 G-Dragon appeared in SBS music show “INKIGAYO” and gave an official comeback performance for his second full solo album, by singing three of his new songs “Niliria”, “Black”, and “Go”.

Upon coming upon the stage, G-Dragon took hold of it. Singing the first song “Niliria”, he got into the traditional Korean folk song rhythm of the song.

The last song “Go” overwhelmed the audience, with a rather shocking big wig which created a perfect look on him, as well as an amusing performance.

Plus, the stage costume lived up to G-Dragon’s reputation as a fashionista. The hip-hop costume, black suit, and unique hat and wig all added up to the colorful style of his comeback performance.<

G-Dragon released 12 new songs among the tracks in his second solo full album “COUP D’ETAT” separately on the 2 and 5 this month, and the new songs have shown a great momentum to sweep number one places in most music charts in and out of the country.

On the 13, G-Dragon will disclose another version of “WINDOW”, and “Black” and officially release his album off-line.