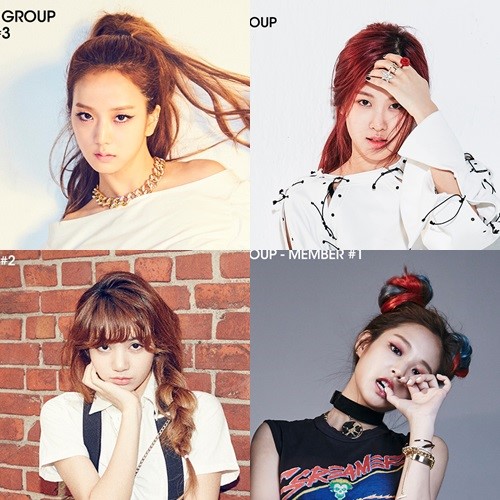 Now that the fourth member of the new girl group of YG Entertainment (“YG”), one of the biggest music labels in Korea, has been unveiled, the other three members who have been unveiled so far are drawing big attention, too.

On June 22, YG announced on the company’s official blog YG LIFE that the fourth member of the new girl group newly launched by YG for the first time in seven years since the debut of 2NE1 in 2009 is ROSÉ. Plus, YG unveiled seven photos of ROSÉ. In those photos, ROSÉ boasts outstanding beauty and charismatic eyes.

YG introduced ROSÉ as a Korean-Australian, saying, “ROSÉ was born in 1997, so she is 19 years old. She has been trained in Korea since 2012 when she passed YG audition”. YG added, “ROSÉ featured for ‘Without You’ of G-DRAGON’s mini-album ‘One of a Kind’. At that time, she was just introduced as ‘feat. ? of YG new girl group’ and the fact that the featuring artist was ROSÉ was not unveiled back then. So, she is now being unveiled four years after her featuring”.

The other three members of YG’s new girl group JENNIE, LISA, and JISOO who were unveiled before ROSÉ also boast versatile talents and eye-catching beauty.

JENNIE was born in 1996. She acted the title role of the music video of G-DRAGON’s solo song “That XX”, to boast her good looks in it. She is fluent in Korean, English, and Japanese.

LISA came from Thailand and she is 19 years old. LISA is also known to be a talented artist with eye-catching beauty. Her dance video has already surpassed six million views on YouTube. LISA is also fluent in not only Thai and Korean, but also English and Japanese.

JISOO was born in 1995. She boasts pure beauty and is known to be talented in dancing, singing, and acting. She has acted in the music video of “SPOILER+HAPPEN ENDING” of EPIK HIGH’s eighth full album released in 2014 and the video of HI X SUHYUN’s single “I’m Different”. She also drew big attention for her acting as a cameo in KBS 2TV’s drama series “Producers” aired last year.

While YG has been unveiling one member of its new girl group on every Wednesday starting from JENNIE unveiled on June 1, the four members who have been unveiled so far boast outstanding beauty and versatile talents, so people’s curiosity about YG’s new girl group is growing high.

In the meantime, YG has already announced that TEDDY, one of the head producers of YG, will be in charge of the new girl group’s debut song and album. However, no information about the number of members of the group and the name of the team has been unveiled so far.