G-DRAGON, WINNER, and BLACKPINK were spotted on one of Times Square billboards.

Currently, a video promoting G-DRAGON’s world tour is being played on one of the digital screens of 1515 Broadway, the main area of Times Square, and is catching the eyes of the people.

In addition to G-DRAGON’s tour promotion video, highlights of WINNER and BLACKPINK’s music videos are being played, and this has become an issue in the social media world. 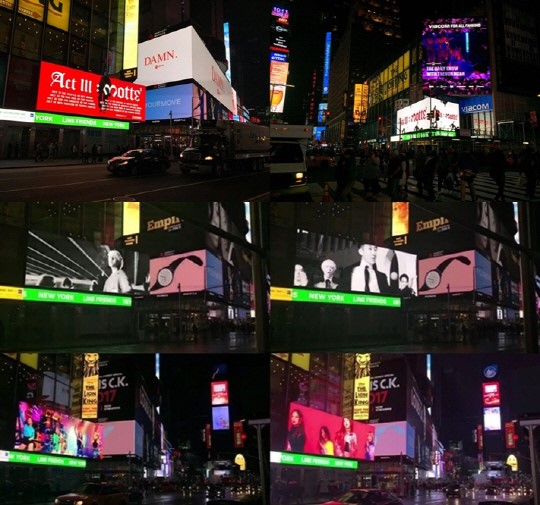 Times Square is the center of Broadway and a global hub for the entertainment industry.

Since it is a popular tourist attraction, fans from all around the world including the UK, France, Australia, Brazil, China, Japan, and Singapore find it fascinating to see their favorite artist on the screen. They posted comments such as “GD rocks”, “I never thought I would see BLACKPINK in New York”, “I stopped when I saw them on the screen. I’m so proud of WINNER”.

Meanwhile, G-DRAGON is to hold a solo concert titled “G-DRAGON 2017 CONCERT: ACT III, M.O.T.T.E” on June 10 at the Sangam World Cup Stadium to kick off his solo world tour. Afterwards, he will be holding 23 concerts in 19 cities around the world: eight in North America (Seattle, San Hose, LA, Houston, Chicago, Miami, New York, and Toronto), three in Asia (Macao, Singapore, and Bangkok), four in Oceania (Sydney, Brisbane, Melbourne, and Oakland) and three in Japan (Fukuoka, Osaka, and Tokyo).