At 5 PM on July 16, the Japanese version of BLACKPINK’s “STAY” music video was posted on YG’s official blog.

BLACKPINK’s debut showcase is to take place at Budokan in Tokyo on July 20, and the Japanese version music videos of the group’s hit songs such as “WHISTLE”, “PLAYING WITH FIRE”, and “STAY” have been released in the run up to its official debut.

“STAY” is one of the double title tracks of BLACKPINK’s second EP “SQUARE TWO”, which was released in November last year. It is a sentimental song that shows well the unique voice of each member. It became quite an issue as it was a genre that BLACKPINK never tried before.

Upon release, “STAY” ranked high up on the charts along with “PLAYING WITH FIRE”. The official music video showed the lovely and sweet charm of BLACKPINK members in its pastel-colored scenes and was loved by many. It was a chance for the fans to see a side of BLACKPINK that is very different from their usual charismatic and restrained stage personas.

In addition to releasing Japanese versions of their music videos, BLACKPINK has launched a big promotion campaign in the run up to its official debut in Japan. In Tokyo’s major streets, from Harajuku to Shibuya, you will be able to find wrapped buses and banners promoting BLACKPINK. 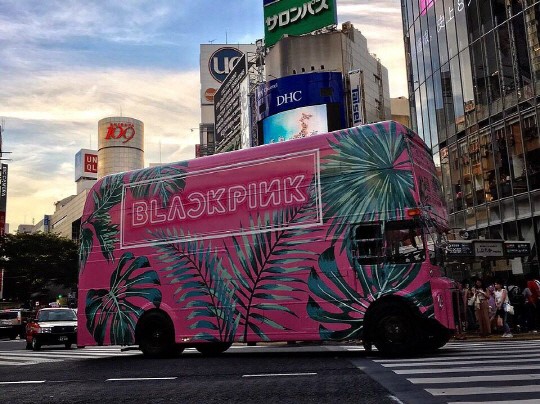 Meanwhile, BLACKPINK’s “As If It’s Your Last” took the No.1 spot on SBS’s Inkigayo chart for three consecutive weeks, enabling the group to win its first ever triple crown since its debut.