Today (5th) at 9 AM, YG Entertainment revealed the track list for BLACKPINK’s first mini album, ‘SQUARE UP’, through their official blog.

All 4 songs were produced by TEDDY, expanding BLACKPINK’s musical spectrum with the previous experience he had while producing for the group since debut. 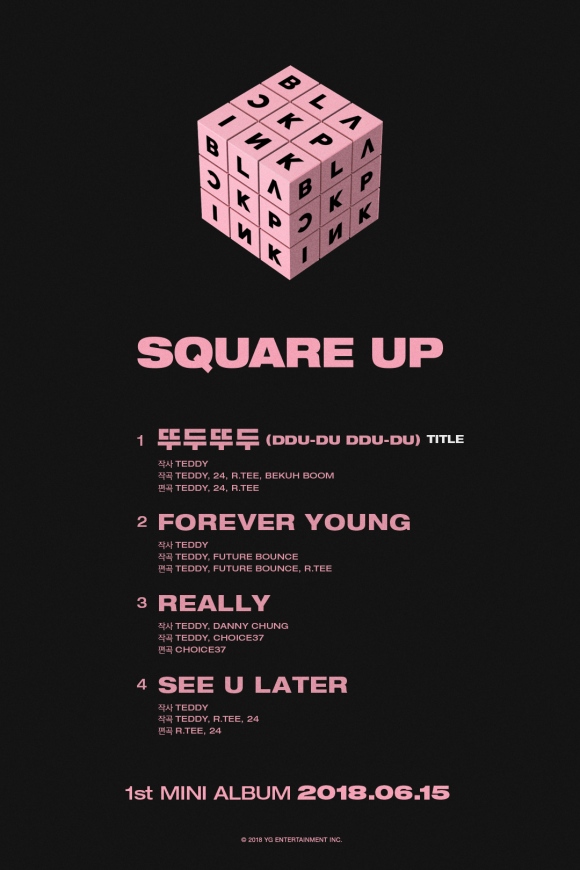 The album starts with the title track ‘DDU-DU DDU-DU’, continuing with the second track ‘FOREVER YOUNG’, which leads to the third track ‘REALLY’, and finalizes with ‘SEE U LATER’.

Related officials from YG Entertainment stated, “’SQUARE UP’ is part of the ‘SQUARE’ series BLACKPINK has been running since their debut. The album is following up with their debut album ‘SQUARE ONE’ and their second album ‘SQUARE TWO’, and will display the development of BLACKPINK’s world of music”.

BLACKPINK’s first mini album ‘SQUARE UP’ has the meaning of ‘Let’s Fight’ and ‘Let’s verse one another’, and contains the message of ‘standing tall’.

Meanwhile, BLACKPINK’s first mini album ‘SQUARE UP’ and its title song ‘DDU-DU DDU-DU’ will be revealed on the 15th.