On June 15, Group BLACKPINK held a press conference at M CUBE located in Gangnam, Seoul, to celebrate the release of their first mini album, ‘SQUARE UP’.

On making comeback in 1 year, BLACKPINK stated, “Us members and YANG HYUN SUK paid attention to every detail of the song. We feel sorry for the fans that have waited for so long, but we are confident that we can make up for it. We’ll do our best to make our fans forget about our vacancy”.

BLACKPINK will present stronger music with their new release. Strong Hip-Hop elements and rap were included in verses 1 and 2. BLACKPINK confidently stated, “People will feel the new side of us”.

YANG HYUN SUK and TEDDY advised BLACKPINK, ‘You don’t have to be feminine’. ROSÉ stated, “YANG HYUN SUK worked hard on our choreography. He checked our moves and told us when to focus. He gave us tips on which moves we should emphasize and where to go strong. He advised us, ‘Don’t be too feminine. Go harder and cooler’”.

TEDDY told the members to practice singing trendily by listening to new releases. BLACKPINK stated, “We discussed a lot on the concepts of the song. We also talked a lot about the melody of the song. He wrote the song with the inspiration he got in the studio”. They added, “He made melodies that are comfortable for each of us”.

As the song ‘DDU-DU DDU-DU’ is a fierce hip-hop track, the group’s fancy outfits caught the viewers’ attention. JENNIE revealed, “We have many elements of hip-hop in our concept. We applied the tough and strong concepts in our outfits”.

The dance break during the interlude is also very impressive. JISOO displayed confidence by stating, “We’ll present a strong performance during the dance break. The rap part became fiercer compared to our previous releases, and our choreography will complement that. It was fun practicing our choreography and vocals, and we became closer to each other. People will look for the song if they watch us perform”.

BLACKPINK stated, “We know that the fans missed us. We will have our first fan signing event. We’re excited to meet the fans at a closer range during the event. We are preparing various events, since the fans have been waiting for us for a long time”. 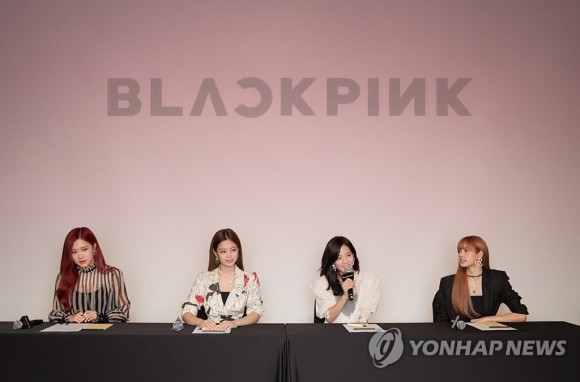 They added, “Us members traveled and spent time with family while preparing for this album. We had time to heal ourselves. We feel happy to show ourselves with a degree of completion, and we’ll be happier when it becomes 6 PM today”.

Meanwhile, BLACKPINK’s first mini album ‘SQUARE UP’ will become available in all streaming platforms on the 15th at 6 PM. The album contains a total of 4 tracks, including the title song ‘DDU-DU DDU-DU’, ‘FOREVER YOUNG’, ‘REALLY’, and ‘SEE U LATER’.