On June 21, the girl group spoke about their similarities with the DJ and comedienne Lee Guk Joo.

Talking about how much she likes the comedy program “Comedy Big League,” Jisoo said, “I like imitating. So when I watch it, I become ambitious about comedy. It’s so fun watching it, so I want to go and try doing it. I like saying [funny things], using popular phrases, and like everything on ‘Comedy Big League.’”

Lee Guk Joo replied, “We’re always ready, so when you get the time, I’ll put you in the segment that you like.”

Rosé said, “Instead of eating a lot, I’m the type that enjoys what I eat. When I eat something yummy, my eyes tear up. There are times when I’m so touched that I cry. These days, I really want to eat spicy noodles.” Hearing this, Lee Guk Joo joked, “You’re worse than me. I don’t even cry while eating. I’ve eaten 10 bowls of spicy noodles before.”

Lisa chose cuteness as one of her similarities with Lee Guk Joo and sang BLACKPINK’s “DDU-DU DDU-DU” with a cute voice. The title track off BLACKPINK’s first mini album “Square Up” has been topping domestic and international charts. 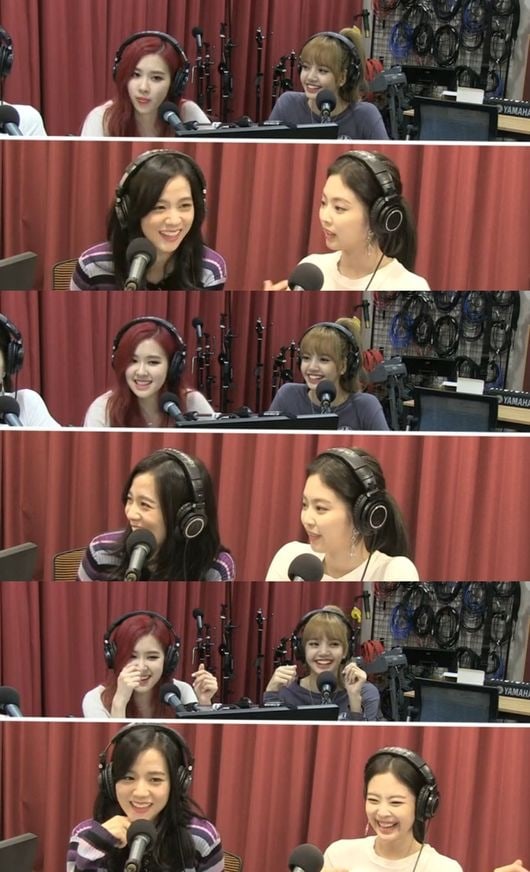 There are many dance cover videos of BLACKPINK songs on the internet. Jennie revealed, “‘Whistle’ is difficult. ‘Boombayah’ has big movements, so it’s easy to follow, but ‘Whistle’ has a lot of grooves, so it’s the most difficult for me on stage.”

After choosing Lisa as the most playful member, Jisoo explained, “She likes to lean on me, spin me around, and plays with me like a toy.” Lisa commented, “Her reactions are fun and I think she likes being attacked.”

Jennie chose Lisa as the member with the most memorable first impression. “She had short hair and tied a bit of her hair to create the apple hair,” she said, “She appeared with really wide-legged pants and danced, so I remember her the most.” Jisoo added, “The point of that hairstyle is that the happier she is, the looser it gets.”

Lisa then picked Jisoo as the most memorable member. She explained, “She looked so innocent and wore a red hoodie.”

Rosé named herself as the member who is easily pranked. Jisoo added, “It’s definitely not Jennie. If something seems suspicious, she’ll say, ‘Where’s the camera?’”

When a listener asked what language she dreams in, Lisa answered, “I was also curious about that myself. Two days ago, I dreamt in Korean.” The members added that when Lisa gets scared, she reacts in Korean and says, “Mom, wait a minute” in Korean to her mom over the phone.

For their No. 1 promise, Jisoo said, “I say this a lot, but I like the other members’ rap parts a lot, so I want to swap parts and do it as I want to.”