On the July 15 episode, the cast and guests paired off to compete in a couple race for the show’s summer special. The couples were Hwang Chi Yeol and Song Ji Hyo, Han Eun Jung and Yoo Jae Suk, Bora and Ji Suk Jin, Pyo Ye Jin and Yang Se Chan, Jennie and Lee Kwang Soo, and BLACKPINK’s Jisoo and Kim Jong Kook.

For one of the race’s challenges, each person had a cup of water attached to their helmet. The couples then had to go through either a horror room or mirror room, and the couple who had the most water left in their cups at the end of the challenge would be the winning team.

At the entrance, she confidently told Lee Kwang Soo, “I’ll take the lead,” but began to cry as soon as she entered the room.

While sobbing, she said, “I think there’s someone here. I think they’re going to surprise me.” Lee Kwang Soo was startled by her tears and told her, “I’ll go first.” He then shed his scaredy-cat image to lead her through the room. 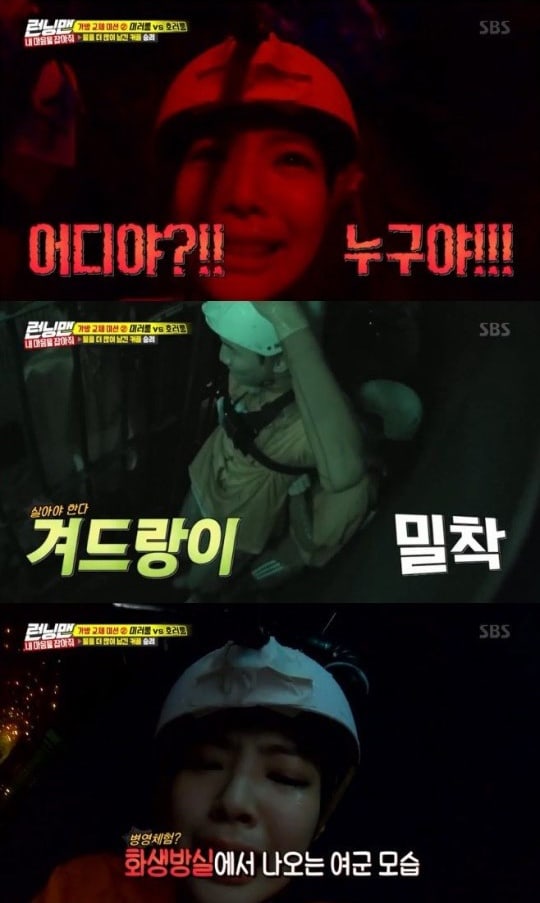 When they finally made it out of the horror room, Lee Kwang Soo threw the remaining water in his cup at the staff and yelled at them for making Jennie cry. Jennie protested, “They said downstairs that there wasn’t anything that was going to scare me.”

The staff told the couple that they had lost, to which Jennie replied, “I know.” Lee Kwang Soo added, “I gave up from the beginning. I didn’t know that Jennie would be like this. She was sobbing as soon as she went in.”

The couple then reunited with the rest of the cast, and Jennie once again shed some tears. Lee Kwang Soo commented, “She’s the biggest scaredy-cat out of everyone I know.” The cast members asked if she was okay, and Jennie pointed at HaHa and repeated that he had told her that the room wasn’t scary.

When the cast members yelled at HaHa for lying, he got up and said, “But isn’t she so cute? I can’t believe I made this happen. You should buy me a meal.”

Check out the clip below!