As soon as you made a comeback, you have landed a spot on the US Billboard making you the highest-charting Kpop girl group of all time. Along with Billboard, your name is also seen rising in UK’s Official Chart and Japan’s Oricon which are considered to be 3 of the major music charts in the world. How does it feel to be called the first and the best only 3 years after your debut?

Rosé: It feels too much. I don’t think I’ll get used to hearing those words that easily.
Jennie: It’s been a year since our comeback and we didn’t really think about the rankings while preparing (for our comeback) so it really is a great honor. We were worried since we’re doing a concept that was stronger than the ones we’ve done before but it’s a relief that the people liked it which makes us feel happy. It also gave us the courage to ‘do something new again next time’. 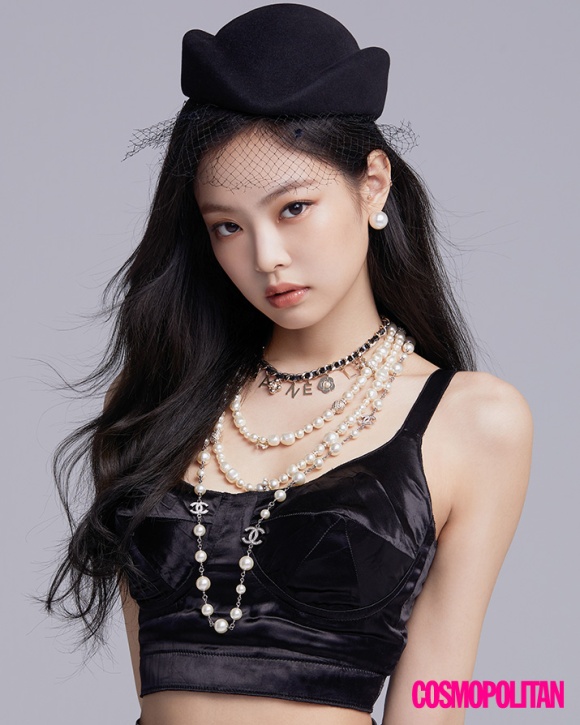 Does this make it a little bit more fun? Or does it make you feel pressured?

Jennie: I think when the promotion started, we were able to let go of the pressure and the tension. We also had that “loosen up and just enjoy” atmosphere among us because the people will enjoy it when they see us doing great on something that we like. We feel that we are all having a great time recently.

You guys have also been appearing on variety shows which you haven’t been on before.

Jennie: We don’t really feel so scared to show ourselves to everyone now. We know that it’s best to show our true image.
Rosé: As time passes by, we tend to enjoy a little bit more even though we still tremble at times. And Lisa’s Korean skills have improved so she can now talk more on shows. Haha.

You’ve been living together for 7 years since trainee days. There must be some ways that you get motivation from each other.

Rosé: Recently, we got inspired seeing Jennie unnie taking good care of her health. We’ve only thought about it but we haven’t done any actions yet. Haha.
Jennie: Ah, when we’re not promoting, I workout a lot and watch what I eat. I pay even more attention especially when promotions are just about to start. Even when they’re eating something delicious, I just eat porridge since I’m on a no-salt diet because I tend to swell when I eat a lot of salty food. Haha. They do feel sorry for me since I’m being more careful when we have to film a music video or do a photoshoot like the one we had today.
Lisa: I felt it when we were preparing for our comeback. We spend hours practicing our choreography until everyone is tired but Chaeyoung (Rosé) stays behind to practice some more and it’s really…
Rosé: It’s because I’m not good enough…. Haha.
Lisa: I don’t think so. Honestly, I need to practice more too but I always have that ‘let’s take some rest today and do it again tomorrow’ kind of thinking. Haha. But seeing Chaeyoung working hard and holding on til the very end, it really inspires me. 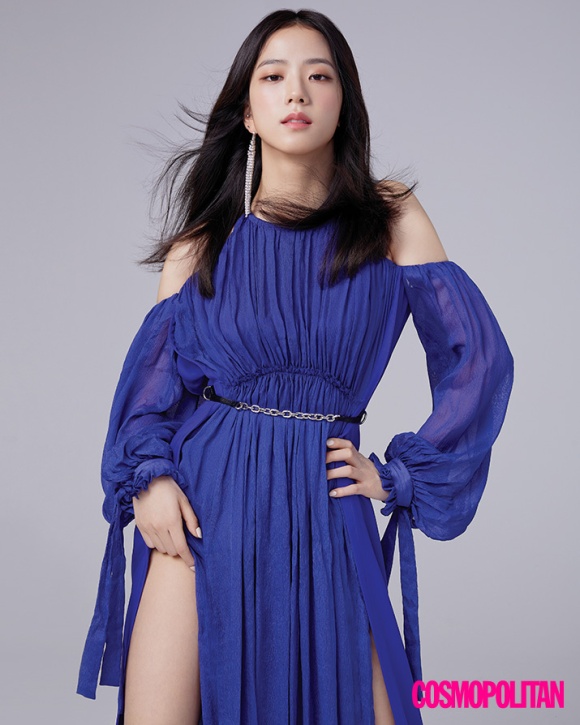 Is there anything that the other members do that inspires you, Jennie?

Jennie: The good thing about the younger members is that… when we’re having a busy schedule like nowadays, we spend more time waiting or preparing in the waiting room than we do on stage. During those times, they always use almost 120% of their energy to cheer us up even though all of us are already exhausted. Everytime we feel worn out, they’d grab us from both sides and say “Unnie! Cheer up!” and that kind of positive energy inspires me.

Is there any workout or diet that you guys do separately?

Jennie: I’ve been working out continuously. I tend to get tired of doing just one type of workout. I’ve been doing flying yoga for quite some time but I’ve also been doing pilates recently. I also eat healthy food after working out. I like avocados so I eat avocado salad together with a glass of detox juice everyday. I make an effort to eat food with less strong taste for dinner in order for me to be able to eat one hearty meal. Everyone can enjoy and maintain a diet for a long time once they find their our pattern.
Lisa: When I see the other members working out, I always say I’d workout together with them but I always fail. However, I still make sure to drink detox juice everyday. Just like Jennie unnie. Haha.
Rosé: I’ve started doing pilates as well. I’m trying to do it once every two days. I’m not particular about food and I tend to eat a lot but I think it helps that the food I like are vegetables such as bell pepper and carrots. As for snacks, I eat more fruits than things such as chips.
Jisoo: I’m the type that gains weight easily but as I spent time with the members, I think my body has changed a bit. I no longer gain weight that easily. I don’t do workout and I think doing dance practice will do. Since we have an upcoming concert, I think we’ve taken our workout up a notch to prepare for it… Haha.

What are the little things that make each of you certainly happy?

Lisa: The phone conversation that my mom and I have everyday! My mom is always happy seeing me working hard these days. It makes me happy and gives me strength to see her in that state.
Rosé: I like searching and watching videos on Youtube. I enjoy watching videos of interviews of my favorite artists or songs that I like ever since I was a trainee. It’s like a healing for me.
Jennie: Nowadays, the thing I enjoy the most is spending time with the dogs in our dorm.
Jisoo: It’s the book I’m reading called <The Flying Trapeze> by Okuda Hideo. I enjoy reading books.

If there’s something you’re longing for nowadays, what would it be?

Jennie: Umm… the next comeback? Haha. We had our first mini album. We used to just release single tracks and now that we’ve released a mini album with 4 tracks included in it, I feel good when someone says “I like this song in the album”. It was also our first time to shoot photos for the album cover and since we’ve experienced the joy of pouring our heart and soul into creating an album, the four of us have this longing to prepare and release a full album soon.

Jennie: I think it has always been a dilemma. The things that the public or the fans want from us are all different. Our concept this time leans a lot closer to that powerful black side and since it has a strong image, we weren’t even sure how satisfied the people will be. Just like the question, we take a lot of consideration about the public’s opinion and our own personal satisfaction as well. The members and I discuss about it a lot and we always end up with the conclusion that ‘it’s better to do things we like and enjoy doing’. We could lose our own colors if we try to keep up with someone else’s criteria and there’s also the possiblity that other people will feel like we ‘just keep on doing the exact same thing’. I think a great synergy will come out when we work hard to be good at the things we want to do.

BLACKPINK is a group that is certain about their own colors. Personally, what kind of image do you have in mind that you think is very ‘BLACKPINK’-like?

Jennie: Umm… I think it’s already obvious but whatever we do, we turn it into something that is BLACKPINK’s? Idols have more activities other than stage performances like appearing on variety shows or doing photoshoots like today. When doing a photoshoot, we turn into cool models. When doing variety shows, it really makes us happy when people think that we are ‘really fun and cute’. It makes me feel like ‘I’m doing well as a BLACKPINK member’ when I can adapt well on any image I’m trying to portray.
Rosé: Each of the members has many things that we want to do. We have great desires and we tend to be very strict on ourselves. Come to think of it, I think it’s very BLACKPINK-like when we show that we are always ready to take on anything.
Jisoo: We always have something to talk about everytime we do a comeback. We say a lot of things such as “I’d like to take on a new challenge”, “I’m not afraid”. I think those are the exact words that describes us. The thing that makes us BLACKPINK-like is we challenge and overcome our fears.

You guys are still in your early 20s. How do you see yourself in your 30s?

Rosé: Personally, I hope I’d still be doing music even though I’m not too sure on what type (of music) it would be.
Lisa: I’d like to take on a new challenge. Since I like to take pictures, maybe I’d be taking pictures while travelling the world?
Jennie: Umm… I think it’d be nice if I would be a step closer to being happy. In that time, I’m hoping I’d be able to find the happiness that I’ve been dreaming of and stay close to it.
Jisoo: I would be happy if I would be living with good health. Everyone: I agree. That’s the best one. Haha.

You guys are becoming icons who represent the millenial generation. What words would you like to impart to women who are in their 20s?

Rosé: I hope you don’t let go of your dreams. We all have dreams that we’ve had ever since we were young but there will be times when things may be a little vague and sometimes we have to give up because of some circumstances. But don’t ever lose hope and wouldn’t it make you happy just being able to go through the process of working hard to get closer to the things you want? Hwaiting! We are all growing together.
Lisa: That’s right. I think it’s good if we give it a few tries and take a lot of challenges.
Jennie: I hope you learn how to believe in yourself. Honestly, there are lots of times when I feel uncertain. There also times when I’m being too hard on myself, when I’m not contented, when I monitor my performance. But I think I was able to move on to the next stage after giving myself some slack and learning how to be contented with myself. When I’m at a fansigning event, a lot of people would ask me “I want to do this but I don’t have confidence. What would you suggest for me to do?” and after thinking of what to say, the thought that enters my mind is that just having a heart that wants to try out things is already a start. From there, you should find out the things you’re good at and if you really enjoy doing that process, isn’t that enough? Don’t just be too hard on yourself, give yourself a pat on the back too.
Jisoo: I think everything that’s been said is all important. Anyway, you own your life so don’t be swayed by other things and forget about things that really matters. And above all, focus on yourself!

PLEASE TAKE OUT WITH FULL CREDITS. Thank you. 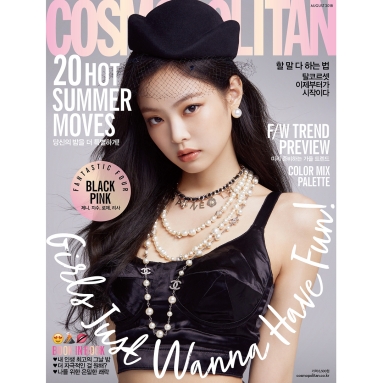 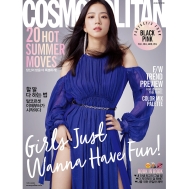