BLACKPINK’s JENNIE revealed her unmatched presence even in her re-appearance on ‘Running Man’ in 3 weeks, becoming the golden hands from losing hands.

JENNIE revealed her losing hand instincts from the beginning, appearing as the prettiest losing hand. She lost the rock, paper, scissors game in the beginning and had to wear an animal costume in the hot summer. However, JENNIE transformed into a cute and lovely baby shark, shaking the hearts of members.

She continued to reveal her losing hand instincts and sloppiness. It continued in the archery mission. She mistook a fake bow as a real one. However, she turned into a golden hand during an important scene, which surprised everyone. She showed perfect archery skills and earned 8 points, hitting the center of the target to beat Kim Jongkook.

JENNIE’s ‘hard carry’ continued. She selected a real ball rather than a water ball in the kicking mission, successfully getting a goal-in. When the goalkeeper in the screen couldn’t block JENNIE’s ball, Jeon Somin revealed her envy by stating, “He knows JENNIE. The goal keeper has facial recognition features”, making people laugh.

JENNIE also made people laugh with her unique frightened face during the senses game. While trying to figure out the members with her eyes covered by touching their faces, JENNIE touched Kim Jongkook’s face and reviewed, “I feel bad”, making everyone burst into laughter. She also screamed throughout while trying to figure out pig skin with her cheek senses along with Song Jihyo. She went through unexpected physical touches with Song Jihyo. She was frightened and startled after figuring out pig skin was the object touching her cheeks, making everyone burst into laughter.

JENNIE became a hot topic after making her guest appearance on ‘Running Man’ last week. She revealed her fan-making aegyo and lovely charms, fascinating the viewers. When she confidently entered the horror room and came back crying and frightened, everyone in the scene and the viewers of the show burst into laughter. She became the representative losing hand and had to receive the final penalty with Lee Gwangsoo. Lee Gwangsoo stated, “She is the unluckiest guest of all time. I’ve never seen losing hands this pretty”. 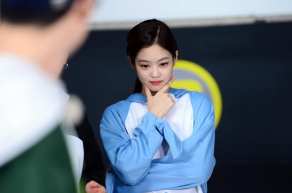 JENNIE took the hearts of viewers once again. She became the golden hand from a losing hand, leading the team to victory. ‘Running Man’ hard-carried by JENNIE had the highest ‘2049 viewers rating’ for 9 consecutive weeks, thanks to her charms and variety senses.